A brut in ruins In the town of Fregene on the outskirts of Rome, Italy, sits an abandoned and deteriorating building. Built by Buenos Aires-born architect Giuseppe Perugini’s (1914-1995) the ‘Casa Sperimentale’ (Experimental House) is an eclectic ode Brutalism that is slowly crumbling away. Perugini built the house in the 1960’s as a way to explore space and scale. Designed as a series of interlocking blocks and forms and suspended in a scaffold-like exoskeleton the home is a tribute to the architectural form and a homage to architects including Paul Rudolph, Le Corbusier, and Rem Koolhaas.

Giuseppe Perugini never reached the fame of those who influenced him and his legacy is now a neglected curiosity that has become overgrown and graffiti-covered in the 20 years since the architect’s passing. Much maligned and misunderstood Brutalism is of late receiving the recognition it deserves as a new generation of architects are re-discovering concrete as a principle material. So, perhaps, this wild example of the form can yet be saved. 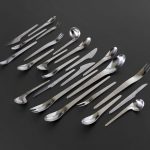