Obviously MCM houses weren’t all glamour homes designed by superstar architects. In post war America demand for new and modern houses had never been higher and the rapid expansion into outlying areas created the tract house and the phrase “suburban living” was added to the developer’s lexicon. Offering an escape from what was seen as an overcrowded and dirty city the idea of a house and some green space of one’s own was a tantalizing proposition, especially after the trying war years. The buying public was open to modern and exciting home designs and the first to capitalize on this was William Levitt who built his ‘tract’ development, Levittown, in New York in 1947. The suburbs were a clean, safe, and – perhaps most importantly – affordable place to raise a family and carve out ones own slice of the American dream.

The Midland Meadows housing development located in Fullerton, California. Designed by Palmer and Krisel in the late 1950's. Click on image for full view.

Developers jumped at the opportunity and, like so many booming enterprises, there were the quick buck boys who built fast and with dubious quality, and then there were the developers who saw the opportunity as a chance to showcase new and exciting design. For these developers, the demand for suburban life not only presented a business opportunity but a chance to offer the ‘New Modern’ to the average consumer and in doing so the suburbs were a democratization of Modernist architecture. Here are a few examples of suburban living, MCM style.

Sitting on the north side of Palm Springs the Racquet Club Road Estates incorporated design features that would become synonymous with what is today known as Desert Modern. Designed by Palmer & Krisel the development was built by the Alexander Construction Company between 1958 and 1962 with actor Steve McQueen being one of the more famous residents of the neighborhood. Click on image for full view.

The 'Frematic' homes, located in Fullerton, California. Built in 1956 this development offered smaller and more affordable homes that still gave the homeowner the Modern lifestyle. Click on image for full view.

College Park, located in Costa Mesa, California, was developed and built by Murray Sanders and Company. Here are some period photos, originally featured in House and Home Magazine in 1958, of a few examples of their affordable and livable homes. Click on image for full view.

A few illustrations from a developer's brochure that makes it clear that folks had a bit more choice in new home builds 50 years ago! In the 1960s Irwin Molasky hired the architectural firm of Palmer & Krisel, best known for their houses in Palm Springs, to design a subdivision in Las Vegas. With winding streets and a good variety of home designs to choose from Paradise Palms won the American Builder's award for one of the best planned communities in the U.S. Here are just a few pages from the 1961 brochure. Click on image for full view. The suburbs done right. A Palm Springs neighborhood of Alexander Homes designed by Palmer & Krisel in 1960. Singer & Sons Previous
The Woods Next 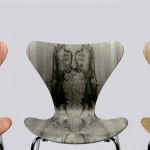